We've all got lucky. Some people would argue we make our own luck, others think it's bestowed upon us by some universal 'energy', Either way, there appears to be an immeasurable element that tips the balance in many of our life's events. And whether it's something we name in retrospect or it has some kind of influence, you've got to admit, sometimes it seems real.

In lock picking, luck has it's place. Without doubt many of us have 'picked' locks less with ability, knowledge or skill, rather a combination of chance, situation and circumstance.

Bosnian Bill once described 'Bitchpicking'; that beginners technique of inserting a tension tool, applying tension, then wiggling and jiggling a pick in the lock and Boom! It opens. And even though we know our skill level was almost zero, and although we know this wasn't planned or executed according to knowledge, we feel a sense of achievement, a sense of skill. I think it's safe to say many of us continued our journey into the incredible art of lock picking after one such experience. I wonder how many people didn't 'get lucky' and never picked another lock?

The first lock I ever picked was the telephone lock on my parents phone, the one they used to prevent me running up their bill making prank calls. I've told the story in many ways and many times, but in truth I just stuck whatever I could find that would fit into the keyway, and it just so happened the gunk-scraper from a set of nail clippers worked. Lucky? Yes.

Now let's make the gargantuan leap from single wafer telephone locks to industrial safes. We've probably just traversed the widest chasm possible in the lock picking world. There's no bitchpicking safes. These are complex machines, typically well designed and lovingly manufactured. I'm not talking about $39.99 safes you might find in a hotel either, although, as you can see below, if you don't know what you're doing, these can still take a bit of effort.... Yes, this is a $39 safe, and this is a friend of mine. He didn't think to ask me, and I thoroughly enjoyed watching him hit it with an axe several times.

Back to big boy safes.

In the basement of the Alberta Vermilion Heritage Museum, there lies a safe. A big safe. It's a 2000lb (907kg) monster, proudly adorned across the top in gold lettering with the name of the original owner The Brunswick Hotel which opened in 1906 and donated the safe to the museum in the early 1990s after it had been unopened for years, the combination lost, and with many locksmiths having failed to open it.

Let's introduce Canadian Stephen Mills, who, with his extended family decided to give the museum a visit during a holiday in the area.

"When we go camping every summer, we've come to learn that every small town, no matter where you go, has something to offer," He said.

They were showed around the museum by volunteer Tom Kibblewhite, who explained the safe was donated to them when the hotel changed hands in the early 1990's with the safe having been locked since the early 1970s. A typical combination safe of the same era. These boxes are as thick as you you can imagine, tough as nails and were built to last. They were also obviously built to keep people out, which The Brunswick Hotel one had, with incredible success.

Intrigued, Mr Mills knelt down in front of the safe. A combination lock, with the usual combination spinner on the front.

The museum had previously enlisted the help of various experts, including many different locksmiths, to crack the code. They tried out all the usual numbers one might try, and default combinations, they had even contacted former hotel employees to see if they could help. Alas, the huge monolith remained unopened.

Not being a lock picker, or a safe-cracker, Mr Mills knew at least the standard turning pattern of combination safes. What a wonderful box. A solid, made to last, made to work, made to keep things 'safe', it's where the word comes from! And Mr Mills opened the damn thing on his FIRST ATTEMPT!

It's a great story, certainly something to remember the holiday by. His extended family were there to watch, his children were there too. I adored my father, he was my hero. But if I'd seen him open such a safe when I was a kid, wow! Life changing stuff. It's the work of a superman! Look at that face! That smile! That incredible feeling when you've just popped a lock. The feeling we all know. Whether it's a pin-cylinder we found in a market, a bike lock, that's been hanging off our garden fence all summer, or a monster of a safe that's not been opened for decades, despite many, many professional and non professional attempts. It's why we do it, it's written all over that face!

So Mr Mills got 'lucky' he made a guess, a slightly 'educated' guess you could say, but a guess nonetheless. And however you define 'luck' you've got to admit, it would appear to have raised it's weird head here.

And what was in the safe? Gold bullion? Incriminating documents? Spy gadgets? Jewelry worth millions? Well no.

All that lay in the safe, under millimeters of dust, was  an old pay sheet and part of a restaurant order pad, dating from the late 1970s. 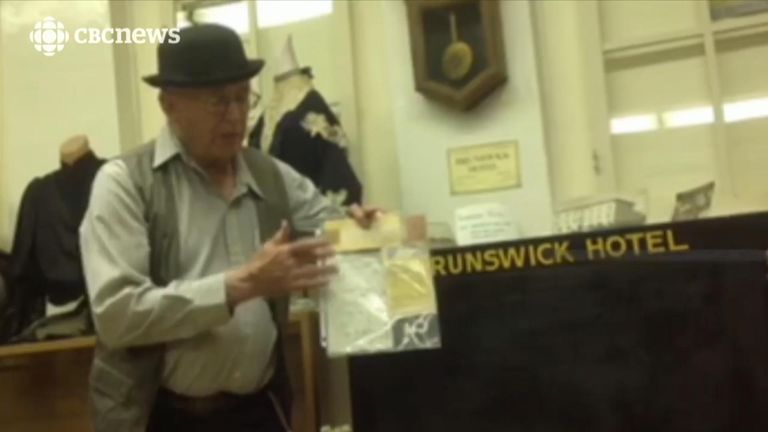 So what can we learn from this, when 'luck' itself is so beyond our control and forever out of our grasp? I think it's always worth giving something a go. Rather than thinking we cannot do something, we should approach everything like we can do something. We should realize that it's not always about skill, experience, ability or knowledge, it can be about things out of our control, and well beyond us. And that would seem to me to be a good way to approach not only lock picking, but life itself. Because if we believe in limits we'll live by them, and if we don't we can transcend them, which can be glorious, even when the prize is a receipt for a mushroom burger and a pack of cigarettes.